During the great parade – an EJC tradition – jugglers march through the city streets to the amazement of its inhabitants. Juggling games are a friendly competition with events like “Five ball endurance” and “Club balance endurance.” A convention’s final moment is usually the “Big Toss Up” – where jugglers throw all of their props in the air, celebrating the joy of being together in a yearly meeting. 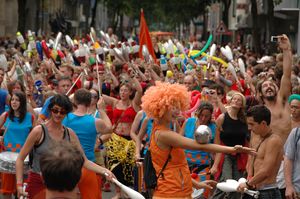 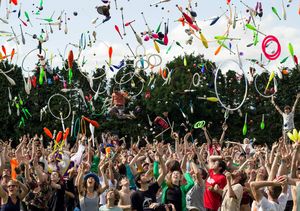 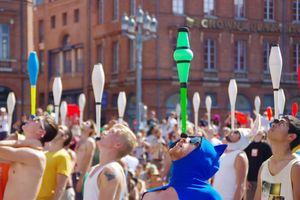 Throwing, re-starting. Throwing, re-starting. In the gym, jugglers practice all day and all night. Workshops are offered – for free – to everyone in attendance, with topics ranging from learning three balls to elite-level skills. Having so many skilled jugglers in one space creates an incredible energy – people often remark that you never juggle better than when you’re at a convention.
Did you know?
Juggling conventions are organized by teams of volunteers – jugglers working on behalf of their juggling friends. It takes two to three years of intense work to organize the annual European Juggling Convention. 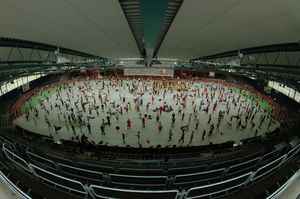 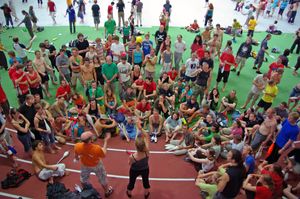 Workshops are given for free by jugglers to everyone
Source : Karlsruhe 2008