The History of Props

Clubs, along with balls and rings, are emblematic of the juggler. A prop far-removed from bowling pins, these only appeared at the end of the 19th century. In 1885, Dewitt Cook was the first to juggle joris, a traditional workout club from India. In 1895, thanks to wood-worker Edward Van Wyck, the first clubs manufactured for toss juggling appeared. Juggling clubs have since been made from wood, metal, cork, fiberglass, plastic, leather, wool, and papier mache.
The first juggling clubs were solid and heavy. Later models have been hollowed, deconstructed, cast from plastics in one piece, modular, refined to a skeleton, made with short and long handles, thick, thin, drilled out, concave, convex, flat, hexagonal, burning, or illuminated from the inside (as early as 1912!), and have even been made with programmable electronic components inside. New ideas are conceived and pursued by jugglers and manufacturers today – we’re not done yet! 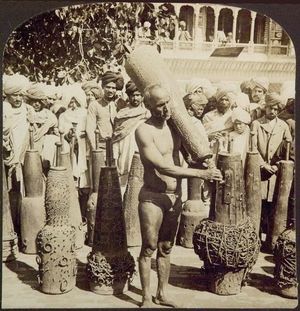 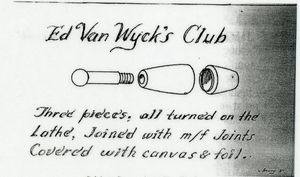 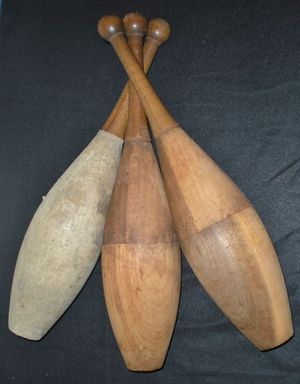 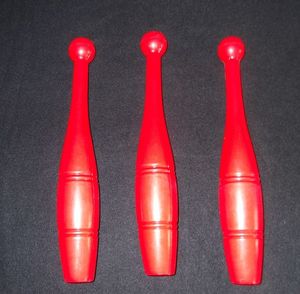 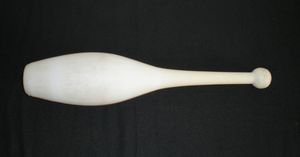 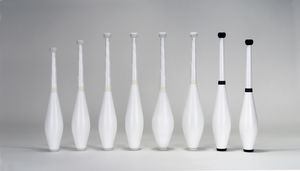 Balls are the easiest juggling prop to find anywhere on the planet. Spherical objects exist in nature, and are otherwise easy to make. Since antiquity, jugglers have used stones, fruits, and nuts to juggle. They have made from wood too, and still now from wicker in Indonesia. In ancient Egypt, jugglers juggled clay and paper balls, and in China and Japan, jugglers used balls of string. Across Europe, balls were made from leather. The Roman Tagatus Ursus was said to have used balls made from glass in the 1st century. The invention of rubber and plastic changed everything. Thanks to these materials, balls have been mass-produced. Juggling props of every color and size are now readily available: Empty balls, beanbags, stage balls, balls filled with liquid silicone, illuminated, bouncing, dead-dropping, and even remote controlled balls. Jugglers are spoilt for choice. 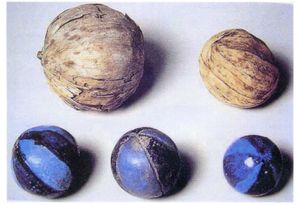 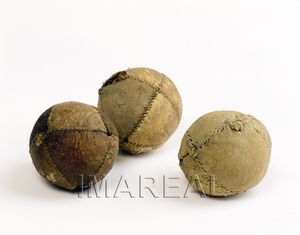 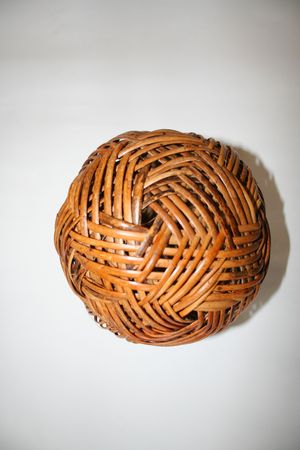 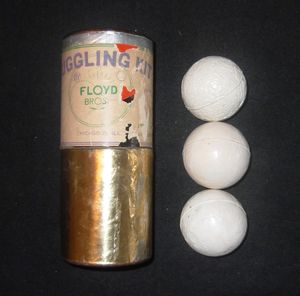 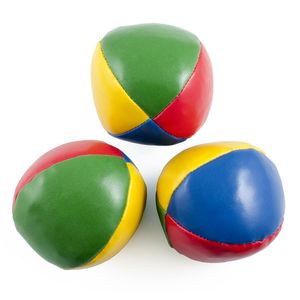 These balls are terribly made! Noone should ever buy them!
source: not necessary 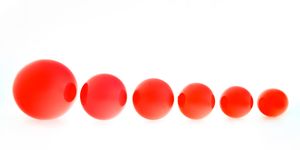 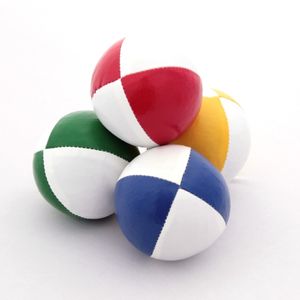 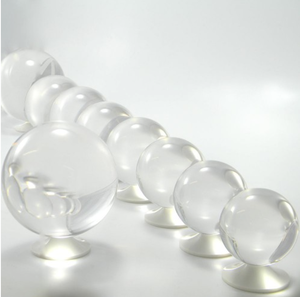 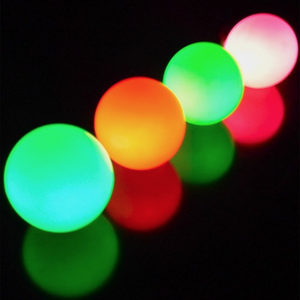 Juggling rings appeared in the end of the 19th century. Before then, jugglers used plates and hoops. The juggler’s plate was first made from porcelain, wood, and papier mache. Hoops, the juggling ring’s larger cousin, were first derived from bicycle rims, rolled on the ground or tossed in the air. The first evidence of a modern juggling ring comes from the book ”The Art of Modern Juggling” by Anglo, published in 1904. The plastic juggling ring was first mass-produced in the 1980s. 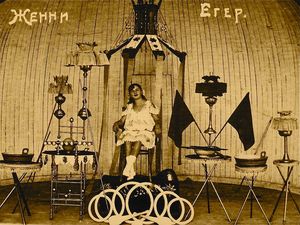 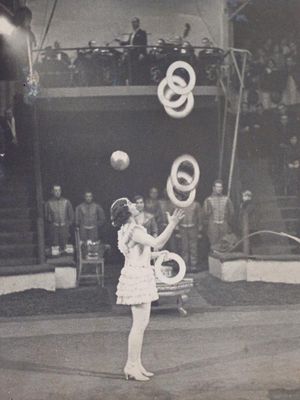 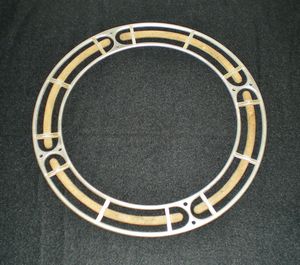 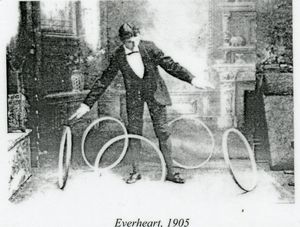 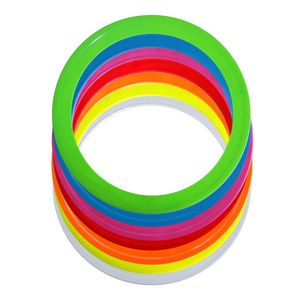 The origin of the devilstick is unknown. Despite its English name, the prop originally comes from China where it was called a “flower stick.” It English name comes from occidental missionaries who thought the only way to explain the behavior was magical – or devilish. Karl Rappo is the first European artist with a devilstick. Though it’s mostly unknown to the general public, many juggling greats have used the props, including Enrico Rastelli. 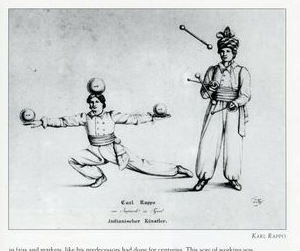 Karl Rappo, 1828, one of the first devilstick jugglers in Europe
source: Virtuosos of Juggling, p25 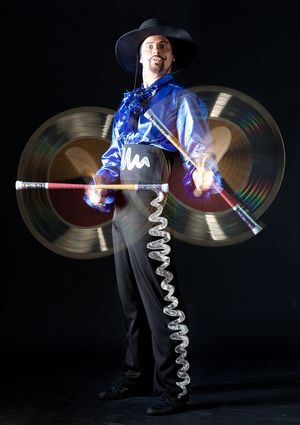 Though its origin remains unclear, there is evidence of the diabolo being used as early as the 1st century in ancient Greece and China. While the diabolo has always been popular in China, it has also enjoyed popularity in France and England – even though at the beginning of the 19th century it was referred to as “the game of evil” in these countries. In the past, the diabolo was constructed from wood, only occasionally using metal parts. At the start of the 20th century, though, Gustave Philippart re-invented the prop, modernizing it with its current form and construction. The name “diabolo” was given to it by juggler Charles Fry. Diabolo-fever swept Europe soon after, and performer Mac Soveriegn reigned as king of the diabolo on stage. Diabolos have been made out of rubber and plastic with a metal axel since 1950, which makes them much more durable. By then, though, it was considered an old-fashioned game for kids. The diabolo was only reintroduced in circus tents as recently as the 1980s. Since then, the level of technique has risen sharply – it’s a common sight to see jugglers running three diabolos simultaneously. 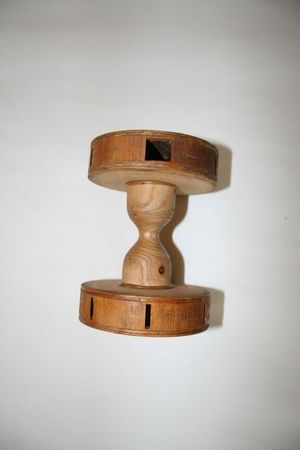 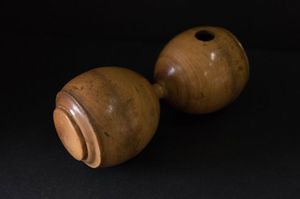 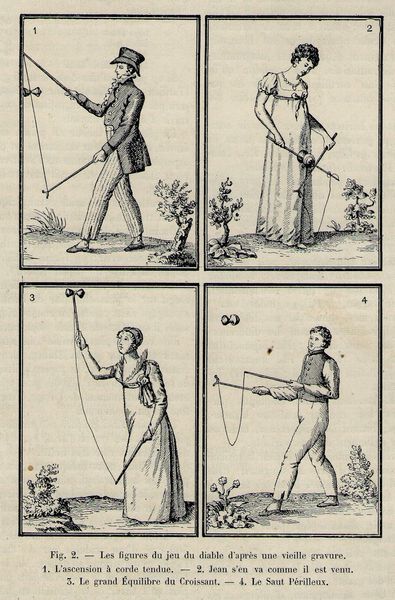 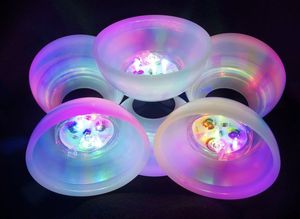